We first meet Blandy on what proves to be his final assignment with Cadogan Ten, the highly secret unit of Her Majesty’s government tasked with covert operations.

“To his colleagues, he was firm but fair, a skilful planner, reliable, trustworthy and daring. A man with Olympic calm and reasoned authority, his voice rarely cranked up an octave, but when it did, people took note and listened.”

However, Blandy’s personal life is a disaster zone. He has a failed marriage behind him and is wracked with guilt for causing a car accident that has left his eldest son, Tim, paraplegic. Blandy is driven by a desire to make enough money for Tim to live independently with all of the special adaptations needed.

When Cadogan Ten is unexpectedly disbanded, Blandy starts up as a private investigator. He is tasked with investigating the disappearance of young German diplomat Carl von Menen, who was last seen in Argentina in 1945.

Blandy is intrigued by the forty-year-old mystery and lured by the potential for high financial rewards. But as he delves into the past, events take a sinister turn and he soon discovers that his own life is in danger.

Hello, readers! I’m delighted to tell you that I have just self-published the sequel,
By Samborombón Bay: The Hunt for Carl von Menen, available in paperbook and Kindle formats.

Forty years after German Foreign Office diplomat Carl von Menen disappeared in Argentina, former British secret agent Richard Blandy is tasked with finding him. Can Blandy uncover the truth about the events of 1945? And whatever happened to the half-tonne of gold von Menen took with him?

Buy on Amazon now or read the first chapter for free!

As a writer, book covers are very important to me. The original cover for Out of Mecklenburg: The Unwilling Spy was going to be two dancers, but it looked too casual and modern. Matador listened to my feedback and came up with a design that used my preferred colours whilst beautifully intertwining the two threads of the story, in Berlin and Buenos Aires, and was instantly clear on its WWII theme.

For the sequel, By Samborombón Bay: The Hunt for Carl von Menen, I’ve chosen to self-publish on Amazon KDP. This meant finding a cover designer. I turned to Spiffing Covers upon my editor’s recommendation, and I’m pretty pleased with the results!

The year is 1985, and the man on the front cover is Richard Blandy, tasked with discovering the truth behind Carl’s disappearance some forty years later. It is set in multiple locations and it was important to me to keep the blend between Germany and Argentina, which I think they have beautifully achieved.

But the big question is: in this day and age, do you still choose a book by its cover? And what do you think of this one? Let me know in the comments! 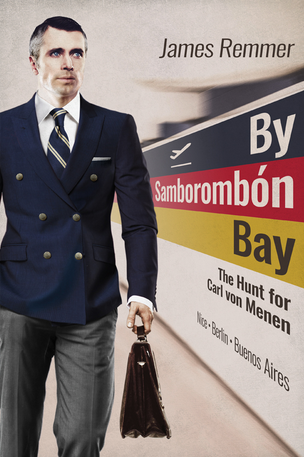